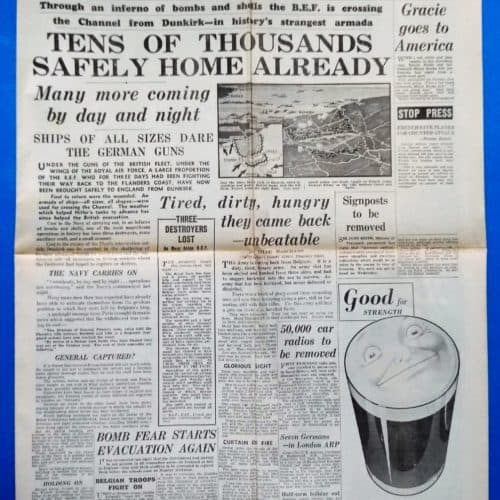 What’s being reported here? What part did Folkestone play? Expand

In May 1940, the British and French armies were in full retreat, as the Germans advanced towards the Channel coast.

Very soon the British were surrounded in a small area around the French port of Dunkirk. It looked as though they would have to surrender. This was Britain’s ‘Darkest Hour.’

A desperate appeal was made for ships large and small to rescue British troops from the Dunkirk beaches. The crews of hundreds of ‘little ships’ answered the call - from fishing boats and yachts, to sailing barges and pleasure steamers. They came from ports all around the UK, including many boats from Folkestone, where the harbour emptied overnight.

Braving attack by German Stuka dive bombers, many boats went back time and again to rescue the troops.  Some lost their lives when their boats were attacked and sunk.

This was the ‘Miracle of Dunkirk’, which plucked over 330,000 soldiers from under the noses of the Germans and allowed them to fight another day.

Did you know?
Nearly 50 of these vessels came into Folkestone Harbour, landing almost 30,000 exhausted and injured soldiers, who were taken away on 64 special trains for treatment and rest.

As the trains crawled out of Folkestone, many local people went down to Tram Road, to hand the soldiers sandwiches, sweets, chocolate and cigarettes through the open carriage windows to sustain them on their journey. 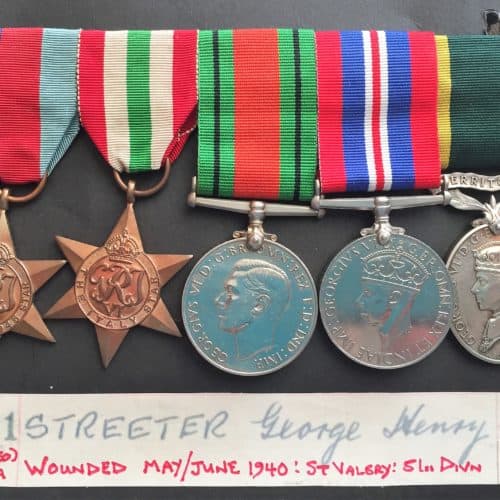 What are these? What happened to this Kent soldier? Expand

These medals were awarded to George Henry Streeter, a gunner with the Royal Artillery.

They are from left to right: the 1939-45 Star, the Italy Star, the Defence Medal, the British War Medal and the Efficiency Medal (for 12 years of service in the Territorial Army).

Many of George’s comrades were evacuated from Dunkirk, but his unit got cut off by the German advance.

He was very lucky to escape by boat from St Valery in June 1940. 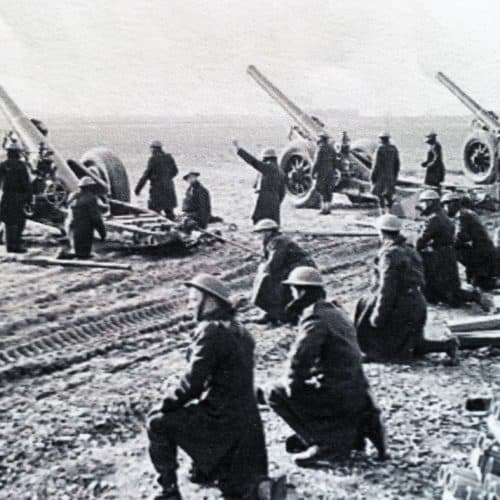 George was with one of the guns like these. Why are some men kneeling, and others standing? Expand

See if you can work out what is going on.

Some men have their arms up.    What are they doing? 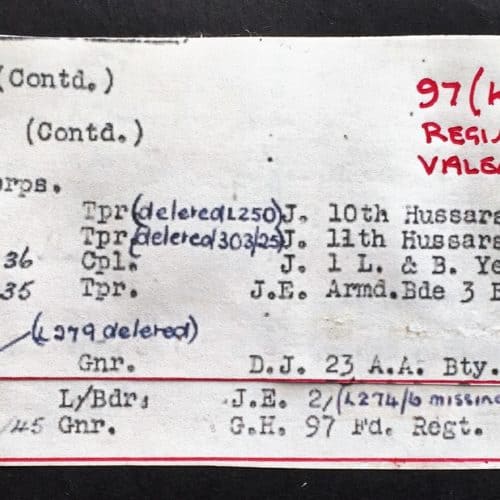 Here’s a list of a few of the British soldiers wounded in the retreat. Can you spot his name? Expand

George Streeter was wounded but lived to fight another day. He later took part in the liberation of Italy. He was presented with his medals after the war ended in 1945.