WW1 activity 3: tea and a bun at the Harbour Canteen 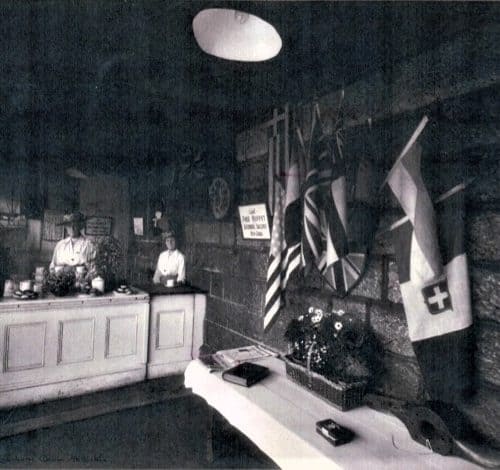 Pupils research the story of the Folkestone Harbour Canteen. Then re-create the café and act out different roles in a piece of drama inspired by entries discovered in the Canteen Visitors’ Books.

Increased knowledge, understanding and empathy with the experience of soldiers, nurses and other service personnel heading off to fight in WW1.

KS3-4 Drama (creating and performing a new piece of drama)

Pupils research the Jeffrey sisters and Mrs Sturt who ran the canteen, as well as the story of the canteen itself, perhaps including a site visit.

For added authenticity and detail, they might research the story of a soldier or nurse whose name appears on one of the pages from the Visitors’ Books, to see how much they can find out about them, or what their regiment or unit did in the war.

They can research the uniforms and clothes people wore in WW1 and some background music that might be playing in the canteen.

Students storyboard and script a short piece of drama set in the Harbour Canteen. The canteen could be set up in the classroom or school hall

The whole class can be given roles, either inside the canteen, as staff and customers, or outside as soldiers queuing up on the Harbour Arm waiting to board the troopships for France.

All might pretend to be soldiers marching down to the harbour. Some are given permission to go inside the canteen, while the rest sit down and become the audience.

Content might include interactions between staff and customers, or between customers at different tables, including snatches of conversation about the war, and personal experiences, whether light-hearted or deadly serious.

Some soldiers might be heading out to France for the first time. Nervous or confident about what to expect. Others may be going back to the front for a second or third time. Battle-hardened, war-weary and cynical about the chances of victory or survival.

Soldiers such as Walter Tull, or Private Charles Theobald (highlighted in the Learn with Objects WW1 topic) may be included as customers in the café, as well as the Canadian nurses named in the Canteen Book entries.

One customer may have picked up a newspaper, and be discussing the latest war news, film or music.

The piece might finish with participants signing the Visitors Book… and promising to return… when back in dear old Blighty!

Use Learn with Objects WW1 2: canteen books for info and images.