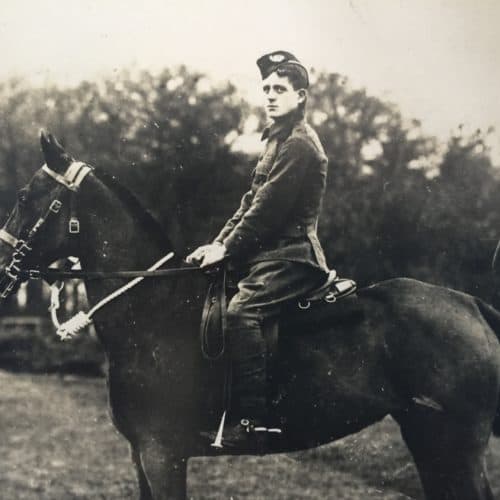 Letters from family were very much welcomed by soldiers in the trenches, as were letters written by soldiers to loved ones at home.  Using the war time experiences of Private Charles Willis Theobald, children can write a letter detailing what life was like for soldiers in WW1.

Increased knowledge and understanding of an ordinary soldier’s experience of WW1, both while training at Shorncliffe Camp, Folkestone, and on the Western Front

Understanding and interpreting a range of historical sources.

Children use the Learn with Objects WW1 18: Canadian soldiers material to find out about Private Charles Theobald and his experiences in WW1. They can also explore the other WW1  topic entries to find out useful background information about Folkestone in WW1 or life on the Western Front.

Please note soldiers’ letters from the trenches were often written in a waterproof purple pencil, in case they got wet.

The biography of Private Charles Theobald (included in this section) will also be useful. Giving details of his background and the wife he married, just before he headed off to war, why not write to her, or to one of your brothers or sisters?

Imagine you are Private Charles Willis Theobald. Write a letter home about your WW1 experiences at Shorncliffe Camp, and your time spent on leave in Folkestone, while completing army training in 1915, including marching down to Folkestone Harbour and embarking for France.
Or write about your experiences as an army cook, based just behind the lines on the Western Front, of your fellow soldiers going into battle, and what it was like when so many didn’t return, or were terribly wounded.

Private Charles Willis Theobald, B Company, Royal Canadian Dragoons was just one of thousands of soldiers from Canada who passed through Shorncliffe Camp, Folkestone in WW1 on the way to the Western Front.

Born in Peckham, London in 1889. In 1891 living in Clifden Road, Hackney with father Ephraim (from Benfleet, Essex) and mother Emily (from Merthyr Tydfil). He had 4 sisters and 2 brothers. His Father was a mineral water salesman.

On leaving school he became a carman, delivering goods by horse and cart.

He had briefly been a soldier before WW1, having joined the Royal Berkshire Regiment in 1908 at the age of 18. He saw service in Ireland before being discharged as medically unfit two years later in 1910.

In 1911 on leaving the army he worked as a baker (making bread and cakes) at Leyton in Essex.

He emigrated to Canada, age 24, in Dec 1913, sailing to Halifax, Novia Scotia, on the Empress of Britain to join the Canadian Army (The Royal Canadian Dragoons).

The Royal Canadian Dragoons was a cavalry regiment (they fought on horseback) although in the First World War they ended up fighting as an infantry regiment (foot soldiers) on the Western Front.

In one of the postcard photographs, Charles is pictured in 1914, looking very impressive in his smart new uniform, on horseback in Hazelmere, British Columbia, Canada.

However, the reality wasn’t quite so glamorous. Being medically unfit to fight as a soldier, and using his recently acquired baking skills, he was employed in the kitchens, as a cook, making bread, pies, cakes and pastries for the troops.

In another photo he is shown in the army kitchen (centre) rolling out pastry for several large pies. Look at the size of the rolling pin, mixing bowls and pans!

Following the outbreak of WW1 the Royal Canadian Dragoons embarked on a troopship to Britain on 3 October 1914.

Like many Canadian soldiers he lived at Shorncliffe, for several months, where the soldiers did drill, kept fit, and enjoyed life in an English seaside town while awaiting orders to sail to France.

He also married his sweetheart, Lily Jackson in Dec 1914, while on Christmas leave in West Ham.

Finally the wait was over. Charles and the Royal Canadian Dragoons marched to Folkestone Harbour and embarked for France on 5 May 1915.

Due to high casualties on the Western Front the Royal Canadian Dragoons volunteered to leave their horses in England and serve as an infantry regiment.

On arrival in France, and with little training in their new role, they went straight into battle.

Charles made a ‘battlefield will’ during the Battle of Festubert on 25 May 1915. It was made shortly before his regiment went over the top at 6.30pm. It reads:

In the event of my death, I give the whole of my property and effects [to] Lily Theobald (my wife), 19 The Warren, Rabbits Road, Manor Park, London, Eng[land]

Although as a cook, he probably wasn’t fighting in the front line, he was very close to it, as the camp kitchens supplying the troops with fresh bread, were just behind the lines, and within shelling range of enemy.

Thankfully Charles was one of the lucky ones. The word Alive written on the will tells us he survived. The will was later posted back to Charles at Shorncliffe (abbreviated to S/cliffe) where he was based for a time after his return from the Western Front.

The Royal Canadian Dragoons fought on the Western Front throughout World War 1 including at the Battles of the Somme (1916) and Cambrai (1917).

Charles survived the war and lived in London until the 1950s (surviving the WW2 Blitz too).

Find my Past has his 1907 British Army Service Record.

His CEF Attestation papers are on Ancestry.com