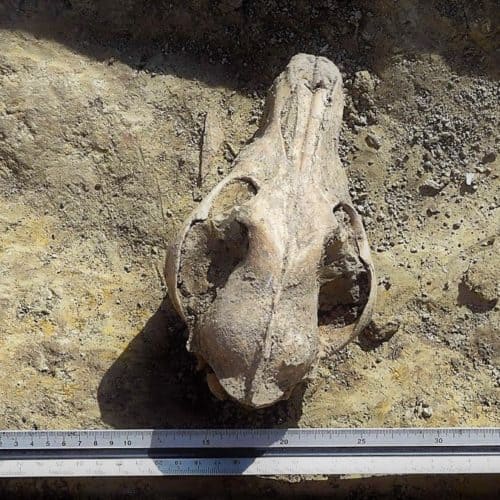 Found buried outside a round house: what is it? Expand

While excavating on Folkestone East Cliff in 2015 archaeologists discovered a fascinating burial.

It was the skull of a small terrier dog, buried in the ditch of an Iron Age round house just outside the door.

Its prominent location suggests it may have been a favourite pet of the family who owned the house.

It was buried facing the roundhouse, as though the dog was still keeping watch over it.

In the Iron Age dogs were kept as pets, guard dogs, hunting dogs and to help round up sheep.

Most of these were remains of food, which gives us evidence of people’s diet. They included large numbers of cattle, pig and sheep bones, but also a few more exotic specimens - including sea eagle and dolphin! 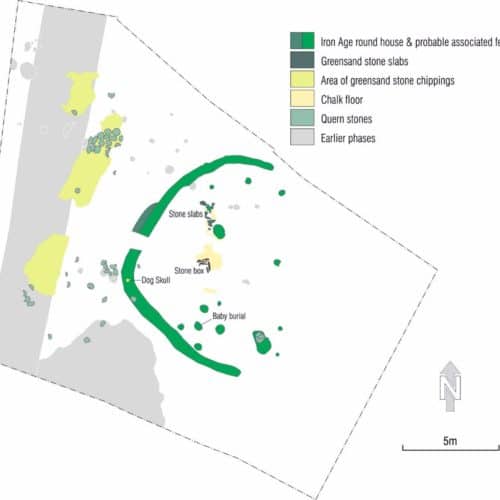 Can you find the dog skull? What else did the archaeologists discover? Expand

This is the archaeologists' plan of the site, showing all the main discoveries.

They plotted the shape and size of the round house from its ditch. It was about 10 metres in diameter and there was evidence of a chalk floor.

As well as the dog skull, they found the bones of a small baby. Sadly, in the Iron Age many babies and small children died of sickness and disease.

They also discovered a stone box inside the round house. It may have been used for storing valuables, but was empty when excavated. What do you think they kept inside?

Outside were lots of heavy round quern stones (used for grinding wheat into flour). The settlement was a production site where quern stones were made, shaped from the local Greensand rock, using hammers and chisels.

Scattered around were thousands of waste chippings.  This was back-breaking work!

The community living and working on the East Cliff exchanged the quern stones for food and luxury goods, with people on trading ships from Britain and the Continent. These vessels probably moored in East Wear Bay at the bottom of the cliff. The archaeologists even discovered evidence of a trackway leading down to the beach. 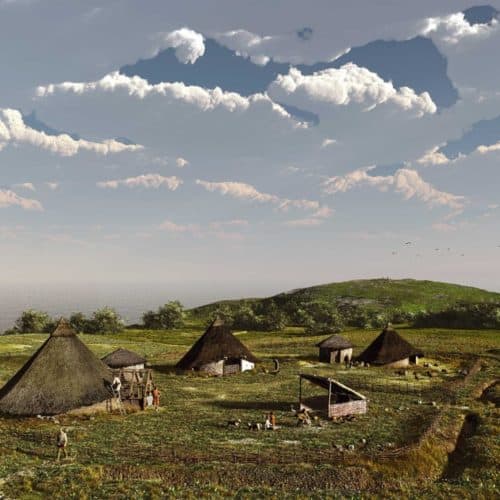 What can you see in the picture? Expand

This is a modern-day computer reconstruction.   It shows what archaeologists think the Iron Age community at East Wear Bay looked like.