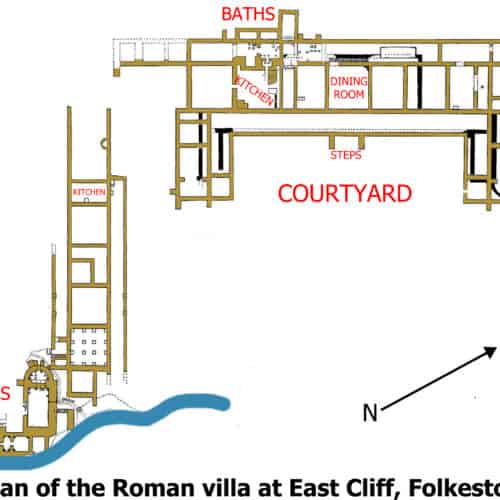 Which rooms can you find? Expand

This is an archaeologist’s plan of Folkestone Roman Villa.   The site was excavated by A E Winbolt in 1924.

The plan shows the shape and impressive size of the villa, with over 50 rooms.

Important rooms like the dining room, kitchen, baths and courtyard are clearly marked.

What do you think the blue line at the bottom of the plan indicates? 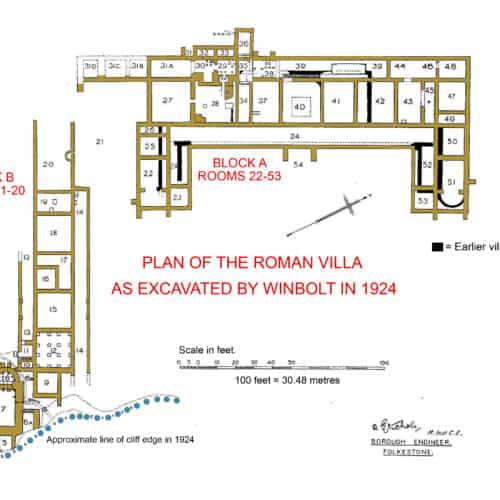 How big was the villa? Who drew the plans? Expand

This is the same archaeological plan... with a few key differences.

This plan was drawn by A E Nichols (Folkestone Borough Surveyor), the same man who excavated the Dover Hill Anglo-Saxon cemetery (see Learn with Objects Anglo-Saxons). 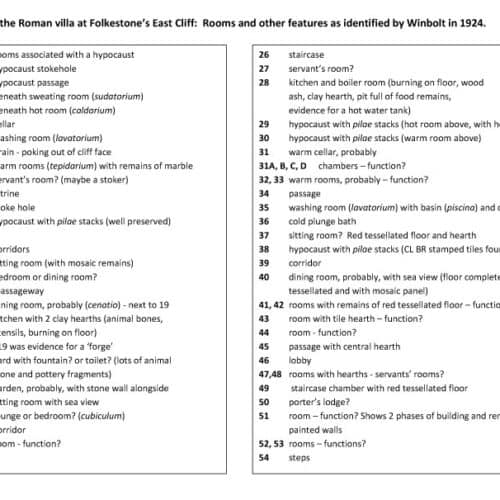 This show what rooms 1 to 53 were used for in Roman times. Can you find the latrine (toilet), sweating room (sudatorium) and sitting room with sea view? Expand

The latrine is Room 10 - handy to know if you get caught short at a Roman banquet!

The sweating room (sudatorium) is Room 3 - if you like it hot at the baths!

And the sitting room with a fine sea view is Room 22 - if you prefer to relax with a glass of fine Italian wine and view of the White Cliffs. 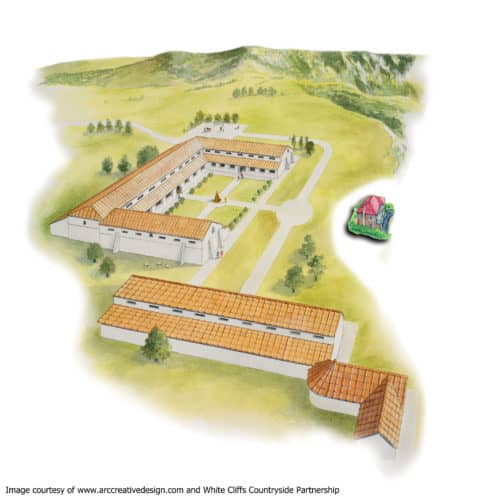 What’s this? Why is there a modern house in the picture too? Expand

This is an artist’s impression of what Folkestone Roman Villa looked like in Roman times.

The modern house with the bright red roof (centre right) has been added to give a sense of scale.

The picture is based on archaeological evidence from past excavations (including plans of the building and what the rooms were used for).

The artist has also used evidence from other Roman houses that have been discovered.

These include other villas in the UK, and also homes in Pompeii and Herculaneum, where amazingly, some homes were 'preserved' when they were buried under a deep layer of volcanic ash, after the eruption of Mount Vesuvius in AD79.

Folkestone Roman Villa was a large country house, known as a winged villa (the C-shaped building towards the top of the picture). It faced an open courtyard and garden, with views of the sea on the right.

It had over 50 rooms. The people and animals included in the picture give a sense of its size.

At the very top of the picture are the Downs (the hills behind Folkestone) and the start of the White Cliffs (top right).