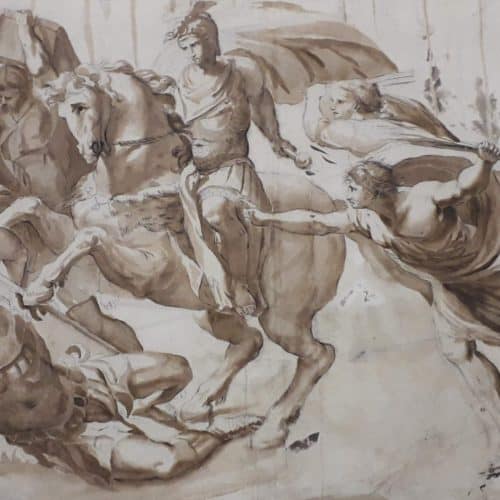 Children investigate The Expulsion of Heliodorus, a copy (by an unknown artist) of a famous Raphael wall painting in the Vatican, Rome.

They use it as a starting point for discussion, enquiry and creativity, including how artists are inspired by other artists, and experiments with printing and mirror imagery.

Learning objectives
Increased knowledge and understanding of art and how it is made, how artists are inspired by other artists, and of Classical and Renaissance art.

Develop skills and confidence in studying artworks and expressing ideas and opinions about them.

What’s happening in the drawing?
What mood is the horseman in?

Tell the children this painting is a copy (by an unknown Renaissance artist) of a famous wall painting by Raphael (who himself was inspired by another famous artwork).

Raphael’s inspiration (from Ancient Rome)
Now show pupils the Raphael original alongside the drawing of the Roman battle scene at Learn with Objects Master Collection 20: drawings from the Roman Arch of Constantine which he used for inspiration.

Background information on the story of Heliodorus
Heliodorus was a Syrian official sent to rob Solomon’s Temple in Jerusalem at the time of Syrian domination over the Jews. According to apocryphal accounts, when Heliodorus and his guard arrived at the Temple ‘they saw a horse, splendidly caparisoned, with a rider of terrible aspect; it rushed fiercely at Heliodorus and, rearing up, attacked him with its hooves.’ The two young companions of the rider, represented as angels, scourged Heliodorus, who collapsed, but the Temple priest took care of him.

The subject was regarded as a prefiguration of Christ driving the money-changers from the Temple.

(Hall’s Dictionary of Subjects and Symbols in Art)

A copy in two halves?
The Master Collection painting The Expulsion of Heliodorus may relate to, or be a copy of, an etched version of the Raphael painting, by Carlo Maratta (1625-1713), made in two halves.

The left half of the etching is the right half of Raphael’s painting
https://www.nationalgalleries.org/art-and-artists/133744/expulsion-heliodorus-left-half

The right half of the etching is the left half of Raphael’s painting
https://www.nationalgalleries.org/art-and-artists/133742/expulsion-heliodorus-right-half

Compare these with an engraving of the whole painting by Johannes Volpato (dates), which reproduces the image the same way round as Raphael’s painting
http://www.nationaltrustcollections.org.uk/object/1252958

Ask pupils to experiment with mirror imaging and printing inspired by some of the content they have investigated above.