Do you think this ship could go to sea? Has it got any masts? Can you find some skulls? Expand

This ship wouldn’t be able to go to sea. It’s a hulk - an old ship not worth repairing. Hulks were put to use for storage, as prisons or occasionally for families to live in (See Learn with Objects Maritime 9: Pelter Brig). This one is moored on the Thames.

It hasn’t got any masts. When a ship was decommissioned, the masts were removed.

There are skulls on the platform.

Prisoners were kept manacled on board, to stop them escaping. During the day the prisoners were taken to do hard labour in the docks or in dredging the Thames. At night they were chained to their bunks.

Fascinating fact
During the Napoleonic Wars thousands of French prisoners were kept in appalling conditions in prison hulks on the Thames and Medway. Some of them made intricate ship models out of mutton bones and human hair, to sell for food, to supplement their meagre diet. 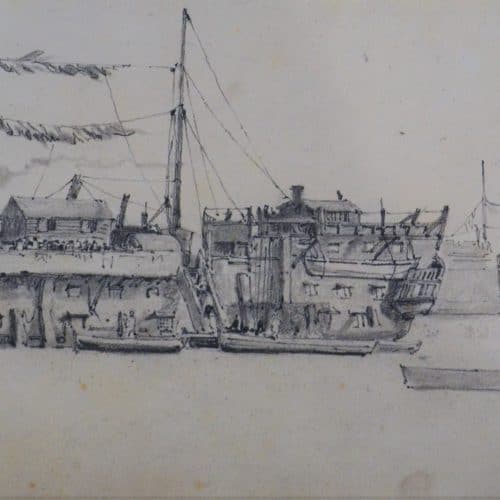 Do you think these ships could go to sea? What has been built on the decks? What is hanging from the masts? Expand

These ships wouldn’t be able to go to sea. They’re hulks - old ships not worth repairing but still sturdy. These hulks have been put to use as floating prisons. They are moored in Portsmouth Harbour.

Houses have been built on the decks.

A gangway leads down to boats that were used for moving prisoners.

After conviction, prisoners sentenced to transportation were moved first to hulks, then to convict ships bound for Australia. Some prisoners spent their whole sentences on the hulks. Living conditions were poor and disease was rife.

Laundry has been strung between the masts. It must be wash day!