What’s this and how did it save lives at sea? Expand

It’s a life-saving rocket - used by the Coastguard in Victorian times to save lives from vessels wrecked close to the shore.

The rockets were attached to a length of rope and launched from the beach, aiming at the masts and rigging of the stricken ship.

If a line was successfully fired across, a bosun’s chair (a canvas seat suspended on ropes) was attached by which passengers and crew were hauled one at a time back to shore. 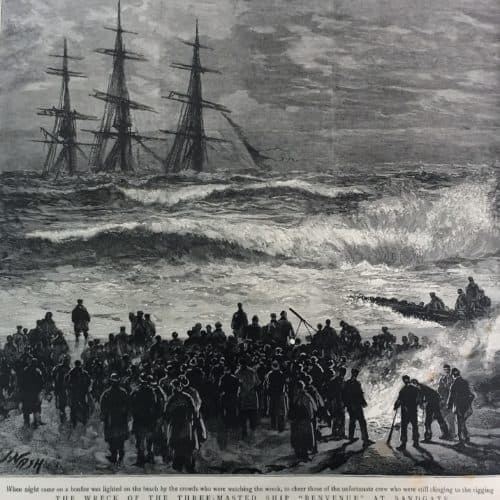 What is happening in this engraving? Expand

This newspaper engraving shows a scene during the rescue of the crew of the Benvenue off Sandgate in 1891.

Can you spot the tube (mounted on top of a tripod) from which life-saving rockets were fired?

On this occasion numerous rockets were fired, but either missed the ship in the hurricane force winds, or the lines broke before they could be secured. The surviving crew were eventually rescued by the Sandgate Lifeboat, after 16 hours clinging to the rigging.

It did work sometimes though: several crew members from the barques Agder and Baron were successfully rescued by the Coastguard using rocket apparatus firing from Folkestone’s Victoria Pier in 1896.

This method of rescue saved the lives of thousands of mariners around the coasts of Britain from Victorian times until well into the 20th century. 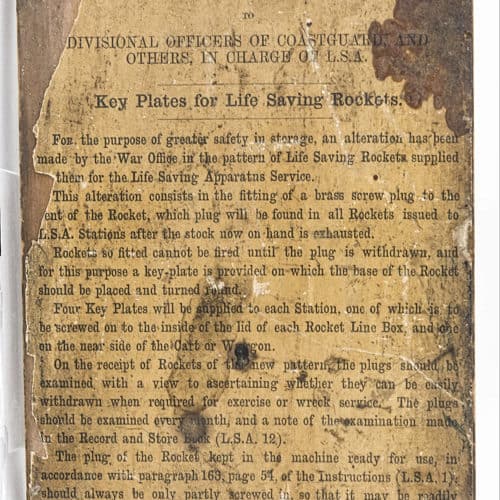 These are instructions relating to Life Saving Rockets. What are they about? Expand

These instructions relate to the fitting of a new brass screw plate to the Life Saving Rocket apparatus to make it safer in storage.

This suggests that there had been accidents, with the rocket going off before it was meant to.   This could be extremely dangerous!

What was this used for? How did the lump of lead on the end help? Expand

This is a lifeline thrower from Victorian times.

There are no rockets involved here. This piece of equipment relied on human muscle power!

It was thrown from the shore, or from a boat towards a drowning person, with a rope (the lifeline) attached through the loop.

The person in distress would grab the lifeline and be pulled to safety.

The lump of lead on the end made it easier to throw further and more accurately.

It’s similar in concept to the life belts and lifelines we see next to beaches and harbours today, but is made of different materials.