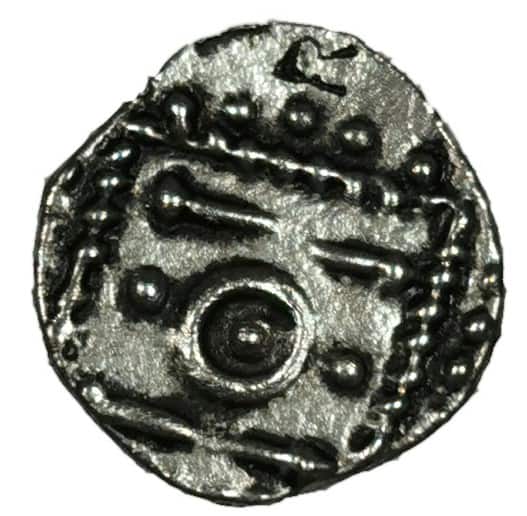 What's this? What's it made of? Expand

This is an Anglo-Saxon coin called a ‘sceatta.’ It is made from silver and has an intricate design on the front (obverse) and back (reverse). This example dates from between 690-725 AD. The name comes from the Old English word ‘sceatt’ meaning wealth.
When the Anglo-Saxons first arrived in Britain they didn’t use coins. Instead, they bartered (swopped) for the items they needed. Gold coins from Europe were used to make jewellery or were given as gifts by chiefs to their thanes (warriors).
In the late 600s a new silver penny coin (the sceatta) appeared, first in Mercia and then in Kent. 12 sceattas made 1 shilling and archaeologists estimate that a sceatta was probably a day’s pay for a skilled Anglo-Saxon worker.
Sceattas are usually very small. This example is just 13 millimetres across in actual size! They did get bigger and before they were replaced in the mid-8th century they had doubled in size.

The first Anglo-Saxon coins made in Britain were made of gold and called Thrymasas. The designs on these coins were copied from Roman ones. Archaeologists can tell this because often the wording on the coins makes no sense, suggesting they were copied by someone who didn’t understand what the words meant!