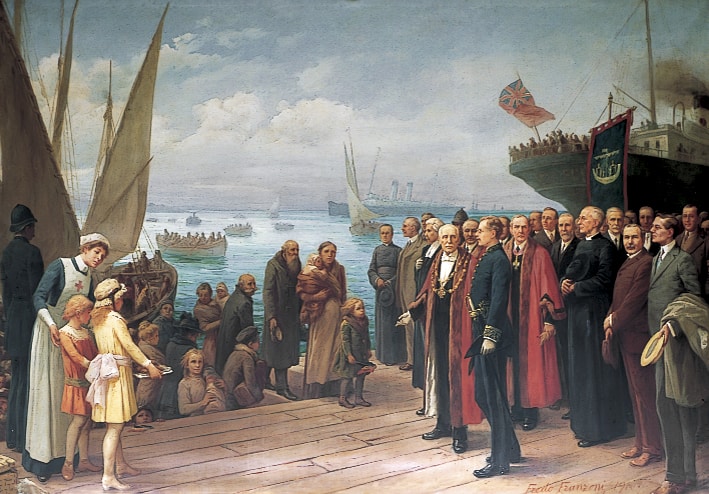 Landing of the Belgium Refugees 1914. Oil painting by Belgian refugee Fredo Franzoni. Presented to the town of Folkestone in 1916 in thanks for their kindness to the Belgian refugees who came to the town in 1914. This oil painting shows the arrival of Belgian refugees in Folkestone in the autumn of 1914. Millions of men, women and children were caught up in the fighting in Belgium in the first weeks of World War 1, as the German army overran their towns and cities. Many were injured, or made homeless due to the shelling of their homes, and decided to flee to safety, sometimes with little more than the clothes they were wearing. They came in fishing boats, coalers (coal ships), and anything that could float, as well as on the larger ferries. Homes, food, medical treatment and work were quickly made available to them, and a newspaper Le Franco-Belge de Folkestone set up to help them find missing relatives. The artist was an Italian-born Belgian refugee Fredo Franzoni (1878-1943), who after witnessing German atrocities in his home town of Charleroi, fled to Folkestone with his wife and family in 1914. Already a well-known portrait artist in Belgium, Fredo dedicated 4 months to completing this impressive oil painting, which stands approximately 3 metres wide by 2 metres high. In 1916 it was presented to the town as a thank you for the help and kindness shown to thousands of Belgian refugees by the people of Folkestone. Interestingly, the painting does not recall a specific event. In reality, the refugees arrived in large numbers (over 64,000 refugees passed through Folkestone from August 1914 onwards, and over 16,000 in one day in October 1914), but without such a large and formal welcoming committee. Rather, in the words of the artist it is ‘illustrative in an emblematic manner’ of the warm welcome they received. Fredo was keen to include the faces of many leading Folkestone citizens and those connected in war relief work.

Scroll back to top